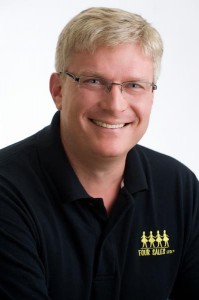 Daniel Sanders has run Four Sales for more than 14 years after taking over from the founders after 34 years. He brings more than 15 years of international business operations experience to Four Sales Ltd. In the 1990’s, Sanders ran a 32-country business for Minnesota, Mining and Manufacturing (3M) in Europe, the Middle East and Africa. Since returning to the United States, Daniel has worked with start-up businesses in the United States and Canada to attract investors and accelerate business growth to realize their sales objectives.

Daniel’s expertise in improving operations, sales, marketing and brand management have given him a very large network of supporters and contacts in the local area, as well as throughout the United States. The network he has built since returning to the United States in 1999 are a valuable resource for the clients served by Four Sales.

Daniel is also a founding board member of the newly established National Estate Sales Association (NESA) and currently its Treasurer, a member of the United Professional Sales Association (UPSA), the former President of Business Network International’s Alexandria and Vienna Chapters, Potomac ExecutiveBiz, the Irish Angels Venture Capital organization, the Boston University Alumni Association, a former member of the TipClub, an annually a judge of the University of Notre Dame’s McCloskey Business Plan Competition, a member of the Mount Vernon-Lee Chamber of Commerce and a former board member, and several other local business and philanthropic organizations. Sanders regularly serves as a charity auctioneer for DC-area charities and helps them raise approximately $1,000,000 per year without charging for his services..

Daniel is responsible for overseeing all day-to-day operations of the company including sales, marketing, advertising, accounting, logistics, and client relations.

Daniel has his Masters of Science in Management and International Marketing from Boston University and an undergraduate degree in economics from Drew University in Madison, New Jersey. He lives in Alexandria with his wife Karen (a four-generation native of DC), and has two talented adult daughters.

Four Sales, Ltd. was founded by four enterprising Northern Virginia women in 1972. The logo of the company is a silhouette of four gals in royal blue with a bright yellow color background. Four Sales’ distinctive blue and yellow “Estate Sale 9-3” signs can be seen weekly in Northern Virginia, DC and Maryland.

When he purchased the company in 2006, Daniel committed to keeping the level of professionalism, energy, and integrity for which the company is known. He has done so successfully. An effort which has led to multiple awards of the Angie’s List Super Service Award and the company being recognized in 2012 and 2013 on the Inc 5000 list of fastest growing privately held companies in the United States.