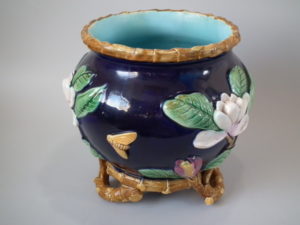 Majolica is a special type of pottery with an opaque tin enamel glaze that conceals the color of the body.

Although majolica pottery has been around since the 14th century, most collectors are interested in pieces produced in the 19th century, both in the United States and Europe.

For example, the George Jones Factory – out of England – is well known for the majolica pottery it produced during the mid to late 19th century.

George Jones is well known not only for the quality and durability of its pottery but also the variety. This includes pedestals, urns, and pitchers (and that’s just the start).

When searching for majolica pottery to add to your collection, here’s what you should take into consideration:

•    The age (and period during which it was produced)

For example, a George Jones calla lily pitcher recently sold at auction for $708. And if you think that’s a lot, a Minton pitcher sold for nearly $2,600 (roughly 10x its estimate).

The nice thing about collecting majolica pottery is that it won’t break the bank. You can find pieces that are hundreds of years old for a few hundred dollars or less. Keep your eyes open online, at auctions, and at local estate sales. You never know when you’ll find that next magical piece of majolica pottery!