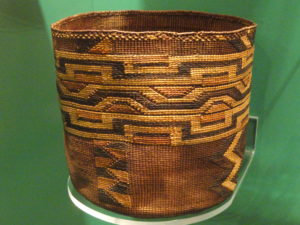 If you’ve ever laid eyes on an Native American basket, you probably fell in love right then and there. From the patterns to the shapes to the attention to detail, these are truly pieces of art.

Not only are these baskets beautiful and functional, but a recent rise in popularity has pushed their value sky high.

Many Native American baskets were made during the Industrial Revolution, which spanned from 1760 to 1840. In other words, some of these are more than 250 years old.

But that wasn’t the only period during which Native American baskets were produced. For example, production slowed during the Great Depression, but some of the most valuable pieces were made during the 1930s.

Recently, a handful of baskets made in the early 1900s have sold well into the four figures.

For example, a 1920 basket with animals and a star fetched $1,680 at a recent auction. And that’s far less than a $3,600 basket, made the same year, which stands 18 inches tall and includes five diamonds.

Upon creation, Native American baskets were made to be functional, such as for collecting food and water and for storage. However, as the years have passed, they’ve become popular among collectors.