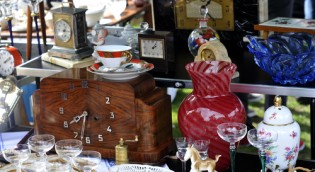 Why You Should Invest in an Estate Sale Company September 12, 2015 Elkan

The most uttered phrase after holding a garage sale must be “never again.” What starts out as a simple way to get rid of some excess junk turns into a weekend of organizing, advertising, hauling, dealing with early birds and bargain hunters who are incensed you won’t sell them a flatscreen television for a quarter, […]

Over the years, Four Sales has become known as one of the top estate sale companies in the Virginia region. While this remains true in today’s day and age, we are proud to announce that we were EstateSale.com’s most viewed estate sale company in the United States for the week ending November 9, 2014 as […]

The liquidation business is driven by the four d’s: downsizing, death, divorce and debt. With about 10,000 Americans turning 65 each day, boomers account for many of the downsizers. But plenty of other people can find themselves in need of help dumping property — whether they are struggling to fit recently inherited antiques into a […]

Even though Janice Morris wasn’t excited about the weird 5-gallon jug her husband Robert bought in a junk store 40 years ago, she agreed to keep it in their house. In spite of children, kicks, and mishandling, the big black jug–in the shape of a man’s bust dressed in formal clothes and hoop earrings–showed little […]

Obama Administration Treats Antique Collectors and Dealers as Criminals: New Ivory Rules Also Put Elephants at Increased Risk. The Obama administration is preparing to treat virtually every antique collector, dealer, and auctioneer in America — and anyone else who happens to own a piece of ivory — as a criminal. In the name of saving […]

Alexandria, VA – While recently picking up an auction consignment at the Clinton, Maryland estate of Guy L. Schultz, representatives of Four Sales, an Estate Sale business in Alexandria, Virginia and Pete’s Auction Services in Madison, Virginia, found a Civil War grave marker. Knowing that the tombstone was of historical significance, Daniel Sanders, President of […]

Vicki Nelson was leaving an estate sale with an opera score for her son when the Santa Clarita woman decided to give him a call. “Oh yeah, they had a whole bunch,” she told the opera student, who demanded his mother go back for the rest. She paid $15 for the entire lot. “When I […]